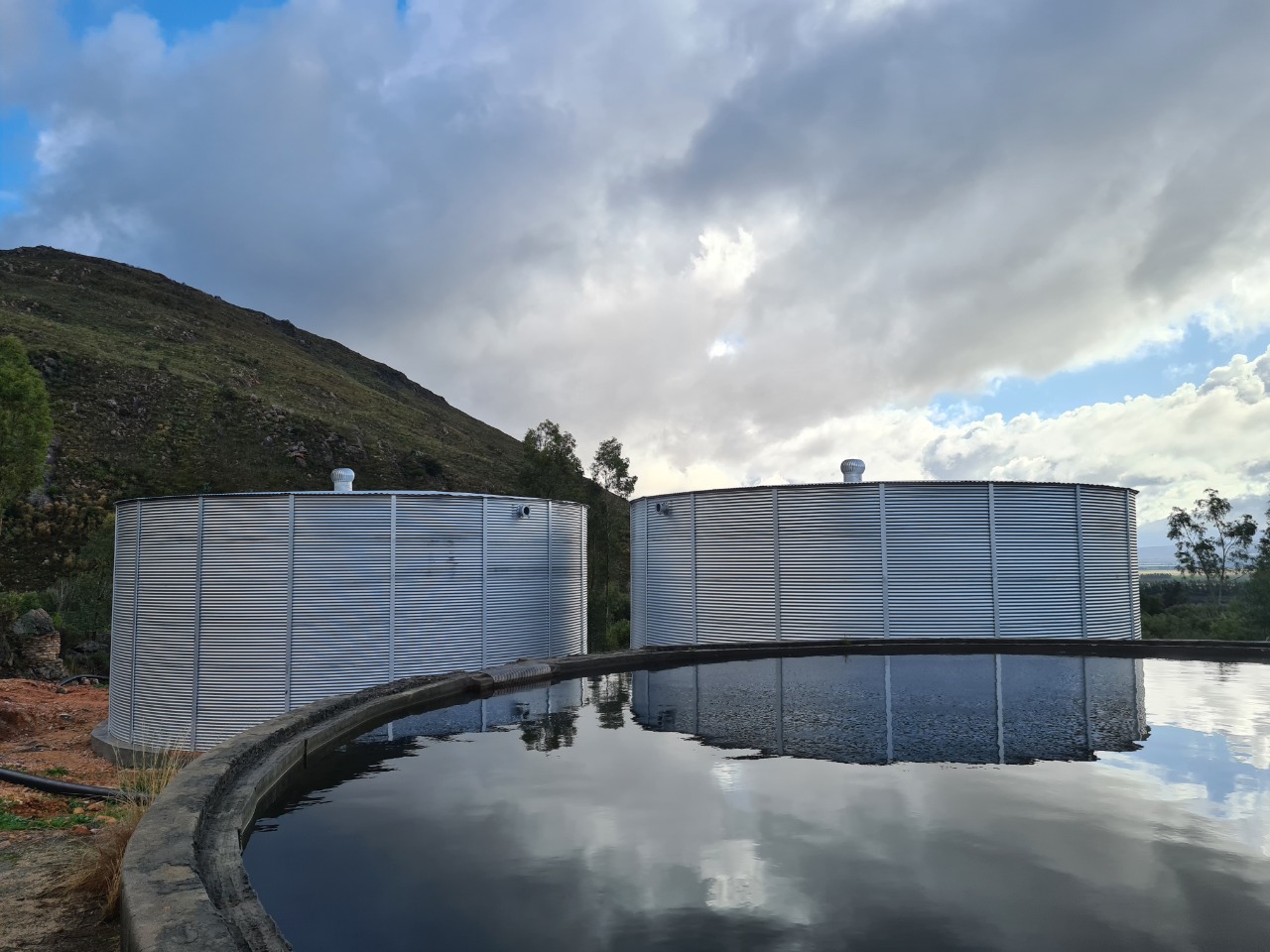 An exciting concept became reality during the month of September when a 100 000 liter capacity Smart Tank Extreme from Aquadam was placed on top of a 10m high steel stand. The project called for a gravity fed system to provide water to the community with enough water pressure to supply the furthest households. The issue was that the traditional method of using bolted square tanks proved to be too costly for the available budget, meaning that a suitable and cost effective alternative solution had to be found. There was also a time constraint with limited time available for the construction and commissioning phase of the project. A circular zincalume tank weighs substantially less than a steel bolted square tank of equivalent capacity. This meant that the engineer could also design the tank stand to be more cost effective whilst taking the bearing pressure and wind lading into consideration, which brought about an additional saving.
The Smart Tank Extreme was constructed on the ground by attaching it to the stand floor, where after it was lifted to the top of the stand with a crane.
“The ease of the installation was the clincher – it was a no fuss installation and the Aquadam installation team made it look so easy it was a pleasure to watch!”
At Aquadam we go out of our way to provide our clients with awesome solutions to their unique requirements, and as always the team came up with a workable solution!
Another successful project delivered on time and in budget by Aquadam!
Speak to us about all your water storage requirements. We will guide you to the right solution and ensure you are the hero of every water project that you tackle!
Fire Tanks as part of Fire Protection Systems

Buildings and properties that have an inadequate water supply for fire-fighting require a fire water tank to supply the required volume of water. Water tanks for fire protection are used in a variety of applications including fire sprinkler systems, fire house reel systems and to have a readily available source of water at fire departments and farms to fill up fire fighting vehicles, etc.

A fire-fighting system is probably the most important service when it comes to building services, as its aim is to protect human life and property, strictly in that order.

A fire hydrant is a vertical steel pipe with an outlet, where the fire brigade can attach their hoses. During a fire, firefighters attach a hose to the outlet and manually open it so that water rushes out of the nozzle of the hose. As soon as the fire fighter opens the hydrant, water will gush out. Some fire systems have sensors that will detect a drop in pressure in the system, which will trigger the fire pumps to turn on and start pumping water at a tremendous flowrate. The quantity and speed of the water is so great that it can knock over the firefighter holding the hose if he is not standing in the correct way.

A sprinkler system consists of nozzles attached to a network of pipes, and installed just below the ceiling of a room. Every sprinkler has a small glass bulb with a liquid in it. This bulb normally blocks the flow of water. In a fire, the liquid in the bulb will become hot and starts to expand, which will shatter the glass bulb, removing the obstacle and causing water to spray from the sprinkler.

The main difference between a hydrant system and a sprinkler system is that a sprinkler system will come on automatically in a fire, whereas a fire hydrant has to be operated manually by firefighters. A sprinkler will usually be activated very quickly in a fire – possibly before the fire station has been informed of the fire – and therefore is very effective at putting out a fire in the early stages, before it grows into a large fire. For this reason, a sprinkler system is considered very good at putting out fires before they spread and become unmanageable. During the mid-80’s the NFPA of America, found that buildings with sprinklers suffered 78% less property damage from fire than buildings without it.

The amount of water kept in fire storage tanks is normally determined by the hazard level of the project under consideration. Most building codes have at least three levels, namely, Light Hazard (such as schools, residential buildings and offices), Ordinary Hazard (such as most factories and warehouses), and High Hazard (places which store or use flammable materials like foam factories, aircraft hangars, paint factories, fireworks factories).
The relevant building code lists which type of structure falls in each category. The quantity of water to be stored is usually given in hours of pumping capacity. In systems with a capacity of one hour, the tanks are made large enough to supply the fire with water for a period of one hour when the fire pumps are switched on.
Building codes may require light hazard systems to have one hour’s capacity and high hazard systems with 3 or 4 hours capacity.

The water is usually stored in dedicated steel fire tanks in close proximity to the building which it serves. It is essential to ensure that this water tank always remains full, so it must have no outlets apart from the ones that lead to the fire system. Fire tanks are separate from the tanks used to supply domestic water to occupants. Designers will also try and ensure that the water in the fire tanks does not get stagnant and develop algae, which could clog the pipes and pumps, rendering the system useless in a fire.

Fire pumps are usually housed in a pump room next to the fire tanks. Like all important systems, there must be backup in the case the main pump fails. Apart from the main electrical there is an electrical backup pump as well as a diesel-powered pump in case the electricity fails, which is common. AlI of these pumps are identical in capacity and capable of pumping the required amount of water.
The water is distributed throughout the building by a network of pipes that are painted red for easy identification.

An engineer must design and size the water distribution to supply adequate fire flow required for the property. This can include the water storage tanks, pipes, pumps, etc designed to act during an emergency. Due to increased regulations and insurance requirements, water tanks for fire protection are increasing in demand. Having a water storage tank ready with the appropriate fire department connections and or ready to supply a fire sprinkler system ensures adequate response in case of an emergency, even in remote areas.

Fire protection water tanks as manufactured and installed by Aquadam are ready to provide a steady supply of water for buildings that otherwise wouldn’t have enough fire flow. Contact us for additional information and on our range of PosMac fire tanks which is taking the industry by storm!

Water is vital to human existence — and a big concern for policymakers, business leaders, and economists is its heightened scarcity.

If water is neglected by societies and governments, the odds are that they could eventually collapse. Without water, businesses ranging from family farms to major corporations face a multitude of problems, including higher costs and long-term viability. The higher costs will eventually be borne by consumers and will make water a more expensive commodity than oil. By 2025 it is projected that two thirds of the globe’s population will face water shortages.

Among the economic implications of water scarcity is the impact that it has on the cost of doing business. Higher water prices leads to higher operating costs which makes it difficult to stay completive on the world market. Where the price of water increases the profit margins start to shrink precariously. This causes firms to regard water access as a competitive advantage and will relocate when away from areas with a water scarcity situation if possible, leading to unemployment in the region that the business vacates. Increases in food prices and lack of water can be the cause of regional conflicts and can lead to migration to where water is readily accessible.
Water scarcity leads to food shortages that raises commodity prices and hinders trade with developing economies.
As you can see water scarcity has a direct impact on rain-fed and irrigated agriculture as well as livestock, and an indirect impact on food processing industries.

Rectifying the situation will not be easy, and will need a collaborative approach. Governments must upgrade ageing water storage infrastructure to prevent water losses. Farming practices must be improved and recycling must be used as matter of course. Technology such as desalination plants can make a contribution although it still remains an expensive technology.
In order to really make a difference, water stewardship is something that must be cultivated to become a way of life for every part of society.